The code is the system of symbols, letters, or words given certain arbitrary meaning and is used for transferring messages which require secrecy or conciseness. Coding is a method of transmitting messages between sender and receiver which is not understood by any third person. Conspicuously, these codes contain various patterns, principles or arrangements which allow the receiver to crack the message or code at the other end using the similar pattern principles or arrangements involved. Concepts of Coding Deductive

In the letter or alphabet coding-deductive questions, the person setting the code replace an alphabet by some other alphabets using a specific arrangement or pattern to form a code. The other person has to decode the code using his mental and logical thinking ability.

In number coding deductive questions, the person setting the code allocates arithmetical code values to different words. The other person has to decode the code using his mental and logically thinking ability

In mixed letter coding deductive questions, the person setting the code gives an entire message in the code language and asks the code of the particular word. The other person has to pick the common word given in two different messages and then the common word picked will be checked with the code given.

In substitution coding deductive questions, the person setting the code assigns some specific entities to code names and based on those entities the other person has to recognize the real code name. 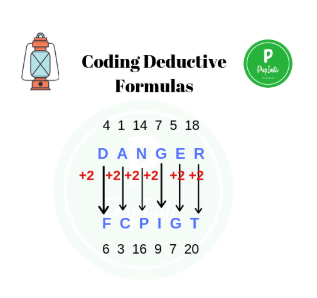