InfyTQ has changed it's pattern completely this year. Don't worry PrepInsta is updated with all the latest pattern. Here, you will get all the Information about InfyTQ's previous year's paper. InfyTQ is also known as Infosys Certification Exam.

PrepInsta provides you InfyTQ Placement Papers with Answers PDF 2023 along with InfyTQ Previous Year Questions with solutions for the 2022 batch.

InfyTQ has updated it's pattern completely and now the test is divided into 2 Rounds. Here on this page all the updated pattern is mentioned.

Certification Round is divided into 3 different Section:

You will have to choose your programming language (JAVA/ PYTHON) at the time of booking slot.

Note: After clearing this round i.e 65% or above marks then you can proceed for either Advantage Round or you can sit for Techno behavioral Interview and if you will clear the interview then you will become Infosys Certified Software Programmer.

Three Coding Questions will be asked in this round.

Note: You can choose the language at the day of test.

Below you will find all the information related to Java/Python Topics:-

The languages that you're allowed to code in are -

NOTE:- Firstly, you can choose either JAVA or Python to write the code at the time of InfyTQ Registration.

Note: Asked only in the InfyTQ Final Round and Advanced Test.

Topic-Wise Full Mock and much more

Click the below topic to solve a similar pattern previous year questions of DBMS. To know more about DBMS Section click here. Click in the button to get InfyTQ Interview Experience

InfyTQ has changed its pattern completely this year and few sections are removed from the test and many more modifications are done.

All the detailed information related interview preparation of InfyTQ is available on PrepInsta. Scroll down to read the interview experience in detailed.

InfyTQ is divided into 2 main round followed by one Interview Round:

I recently appeared for the InfyTQ exam conducted by Infosys.

I got to know about this drive from PrepInsta’s WhatsApp group. They gave all the details about the exam including the eligibility criteria, total number of rounds and what topics we need to prepare for the exam. Their prime InfyTQ course helped me a lot to clear this exam.

To apply for InfyTQ I registered on their website and from there selected a date for the exam. They had the option to select either Python or JAVA as their preferred language. I chose Python as it is my most comfortable programming language.

InfyTQ had two rounds:- Certification round and Advantage round.

Certification Round is the first round of InfyTQ. This round was conducted for 3 hours.

The programming questions were of moderate level.
One question was based on array, and the second was a matrix based question.

The advantage round was a hands-on coding round where we had to solve 3 questions in 3 hours. The three questions had different weightage.
Previously Atulya Sir had mentioned that the third question carries 100 marks so I had in mind to solve that question properly.

There was one Dynamic Programming question, one question based on Greedy Algorithm and one pointer question in Data Structure Algorithm.

I was able to solve the first and third question completely. The second question was not very difficult, however due to time constraints, I could only solve it partially.
Once the exam was over, we were told to wait a few days for the results.

I got an email that I had cleared the Advantage Round and I was invited to attend the interview.

Infosys conducts only one interview round, so I prepared extensively for it. PrepInsta’s interview preparation courses helped me a lot.

The interviewer was very kind and polite. I was having some internet issues, but he was very patient throughout the process.

The interview started with him introducing himself. He then explained in brief about his journey at Infosys and about the company.

He then asked me certain questions. I have listed the questions below.

I asked him for feedback on my interview. However he told me that he would not be able to share that, and I could only know that based on the results. He however mentioned that depending on this interview I could get shortlisted for any of the 3 profiles (SP,DSE,SE).

I thanked him for that and the meeting ended.
I honestly thought that I might have made a bad impression with the last question. However some days later I got to know that I was selected for the role of Digital Specialist Engineer, and honestly that was the best day of my life.

For anyone appearing for InfyTQ, I hope my InfyTQ Interview Experience will help you. Best of luck.

Total Number of Question (Certification Round) : 22 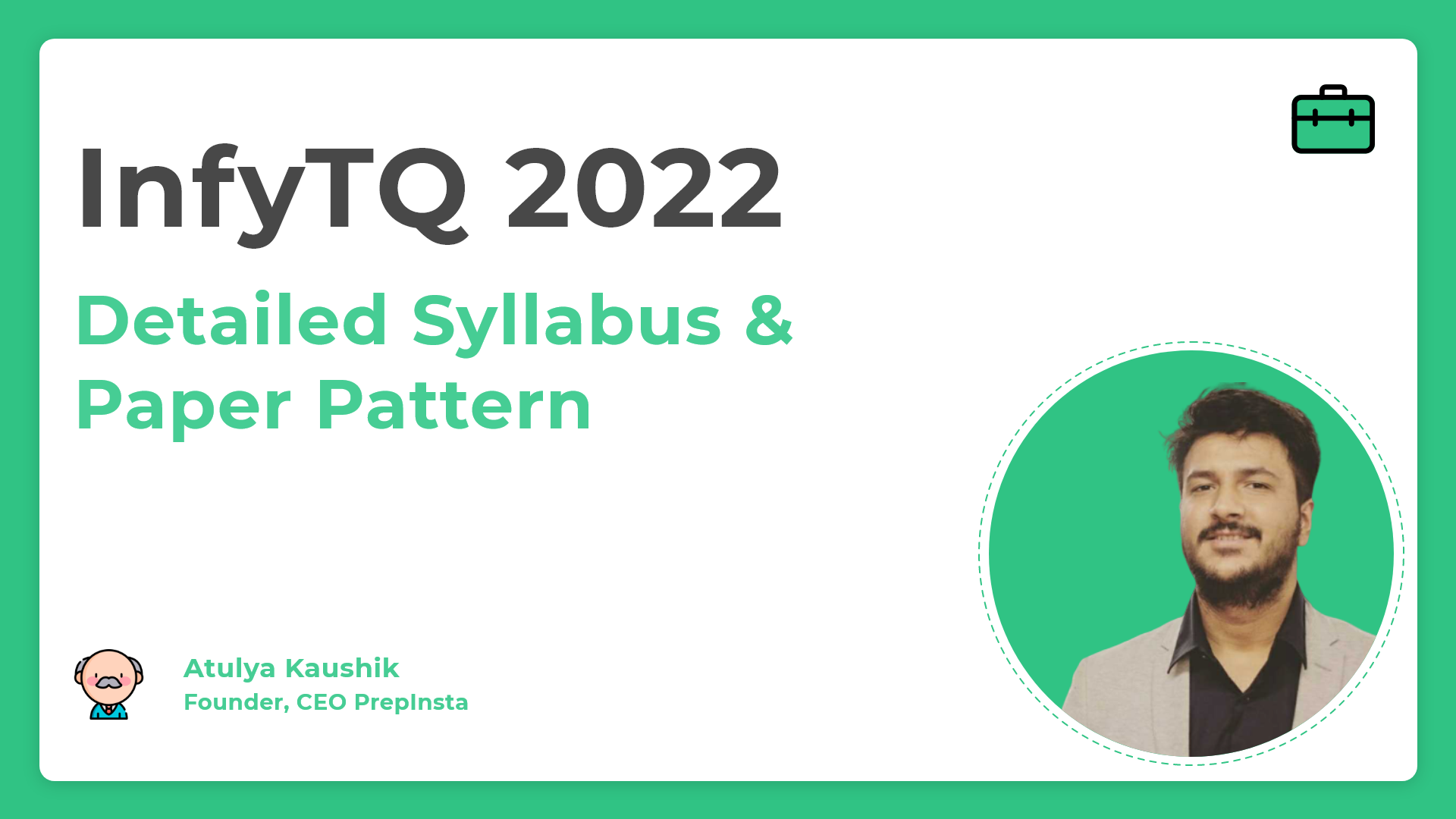 No, there is  no negative Marking in the first round i.e (Certification Round) As well as  in the second round i.e (Advantage Round).

The dates for InfyTQ 2023 exam are yet to be decided

You will get a mail on your registered email id 7 days prior to the date of certification test.

No, there are no charges. The course on InfyTQ and the registration to Infosys certification are totally free of charge.

No, once you booked the test slot, you won't  be able to change it.

No, you will be allowed to give the test only at the scheduled  date and time.

87% of prime members learners got selected in Infosys

Topic-Wise Full Mock and much more

87% of prime members learners got selected in Infosys

8 out of 10 fresh grads in Infosys are from PrepInsta