A series of number is termed to be in arithmetic progression when the difference between two consecutive numbers remain the same.

It also means that the next number can be obtained by adding or subtracting the constant number to the previous in the sequence. Therefore, this constant number is known as the common difference(d).

For example, 3, 6, 9, 12 is an AP as the difference between two consecutive terms is three which is fixed. 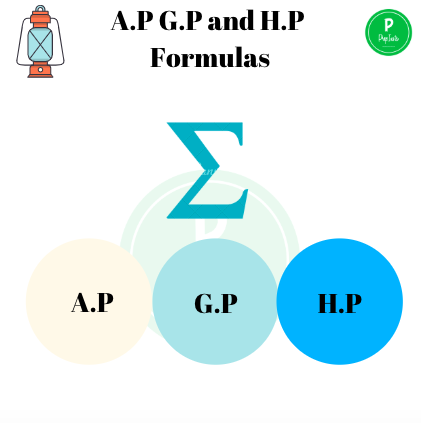 If the ratio of any two successive terms is invariably similar, then the sequence is termed a geometric progression.

Naturally, it can be defined as a series in which the next number in the series can be obtained by multiplying a constant to the previous number in the series. Therefore, this fixed term is known as the common ratio. Quantities are termed as GP if they tend to increase and decrease by a common factor.

Suppose, if ‘a’ is the first term and ‘r’ be the common ration, then

Geometric mean = nth root of the product of ‘n’ terms in the GP.

Each of the ones will be equal to the common ration,

Let ‘a’ be the first term, ‘r’ be the common ration and ‘n’ be the number of terms

Harmonic progression is the series when the reciprocal of the terms are in AP.

If GM, AM and HM are the Geometric Mean, Arithmetic Mean and Harmonic Mean of two positive numbers respectively, then