Tokens are called building block of C programming, that means only with the help of tokens a C program can be created.

There are some internal tokens we need to know while writing a program in C to understand the most basic to the syntax of the C language. Tokens are called building block of C programming, that means only with the help of tokens a C program can be created.

There are some internal tokens we need to know while writing a program in C to understand the most basic to the syntax of the C language.

Some internal tokens are:-

for example, look at the program below. this program is used in the correct order of tokens. 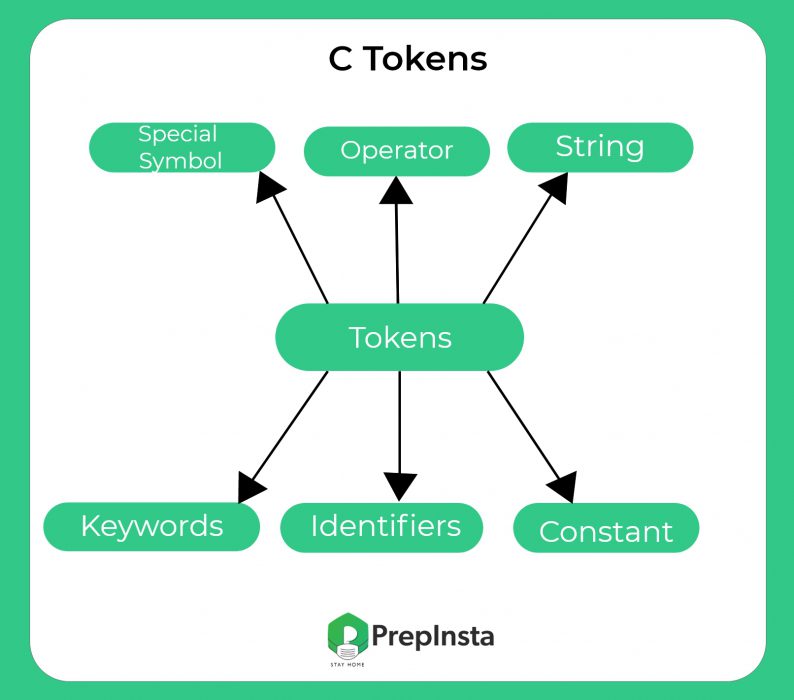 Keywords are predefined statements ,operators reserved words which have a special meaning to the compiler while execution, they are a part of it and can not be used as an identifier. C language provides 32 keywords. every keyword has a special meaning. each keyword is defined to do a specific job. Here is a list of some identifiers given below

In a simple language an identifier is the name of a variable (integer,float(decimal),character) given to a variable or constant for a program just like a math problem. It can start anywhere from A to Z or a to z or underscore ( _ ) and you may or may not add more to the later by integer digits or more letters or underscores .

But one should always remember that C is a case-sensitive programming language .So identifiers like Goku, goku, _goku, goku1 ,Goku1 are all different identifiers .

Note : C doesn’t allow punctuation’s like ! @ $ % & * in identifiers so make sure you don’t have a [email protected] or goku! named identifier .

Identifiers are the names that give you variables,constants and functions. these are some rules to give to these names that you follow, if you don’t follow then there is an error in the program.

Constant is a value, which does not change in program execution.

3.Float constant – In C program, such numeric value in which the digit after the decimal is called float constant.

4.String constant – many literal characters are placed under string literal.

The following symbols are:-

Braces {}:- these curly braces are used to show the starting and ending of a block of code containing some executable statement.

Parentheses ():- Parentheses are used to specify the function call and function parameter.

Brackets []:- this is the opening and closing brackets. it is used as array element reference. these stipulate the single and multidimensional subscripts.

Comma (,) :- it is used to separate more then one statement.

Semicolon:- In C program after every statement we have to put a semicolon (;) which tells the compiler the statement ends there .For example

It indicates the end of one logical entity.

2. Binary Operator:- Those operators, which require two operands is known as binary operator.

7 comments on “Tokens in C”