Tip : If you have any query related to sample questions and curriculum then comment in the comment section below . 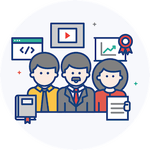 Let X is the cost of pure Milk. Cost of Misture,

Ques 3. External old age when a man behaves like a foot

Ques4.  A person of good understanding knowledge and reasoning power.

Q1.  Which of the following is the correct syntax to send an array as a parameter to function?
a) func(&array);
b) func(#array);
c) func(*array);
d) func(array[size]);

Answer: d
Explanation: Local variables are stored in an area called stack. Global variables, static variable and program instructions are stored in the permanent storage area. The memory space between these two regions is known a heap.

Q5. A condition where in memory is reserved dynamically but not accessible to any of the programs is called _____________
a) Memory leak
b) Dangling pointer
c) Frozen memory
d) Pointer leak

Answer: a
Explanation: If we allocate memory dynamically in an function (malloc, calloc, realloc), the allocated memory will not be de-allocated automatically when the control comes out of the function. This allocated memory cannot be accessed and hence cannot be used. This unused inaccessible memory results in memory leak.

Q6. What is the Aesthetic principle among the following?
a) High quality programs can be constructed from self contained, understandable parts or modules
b) A design will be more or less easy to be build
c) Beauty is one of the important factor to be acknowledged as design principle
d) None of the mentioned

Answer: c
Explanation: Aesthetic principle states Beauty as one of the most important factor to be acknowledged.

Q8. The free() function frees the memory state pointed to by a pointer and returns ___________
a) the same pointer
b) the memory address
c) no value
d) an integer value

Answer: c
Explanation: The free() function frees the memory state pointed by a pointer and returns no value.

Q11.  . Which of the following life cycle model can be chosen if the development team has less experience on similar projects?
a) Spiral
b) Waterfall
c) RAD
d) Iterative Enhancement Model

Answer: a
Explanation: Relying on risk assessment/analysis provides more flexibility than required for many applications which overcomes the criteria of less experienced developers.

Answer: a
Explanation: Coupling is the degree of connection between pair of module.

Q14.  The code shown below is an example of:

Answer: b
Explanation: In the above code, the pointer p, points to a memory location which has been freed. Hece the above code is an example of dangling pointer.

Q 15. Which of these is correct with context to coupling?
a) Failure to hide information leads to loose coupling and cannot be avoided
b) Modules that communicate using special data types and structures are less tightly coupled than modules with simple values
c) When modules communicate only through public module interface, their coupling strength is proportional to the number of messages and number of data passed in between
d) All of the mentioned

What is the time alloted for coding section ?

The time allotted for coding section is 20 minutes. It requires complete knowledge

What is the negative markig for COding section ?

There is no negative marking for the Coding section . You should have to prepare for the coding section well to attempt the one question of 20 minutes.