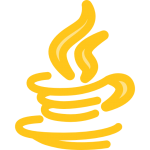 Java is an object-oriented language that was developed as a project by James Gosling and his team, Sun Microsystems, in the year 1991. It was initially designed as a problem-solving platform  which was later accepted worldwide due to it’s high efficiency. What is a platform you may wonder?. It is basically an environment where a software is implemented.

This project was initially named oak. But due to patent issues it was dropped and replace by JAVA which is a breed of coffee. Hence we can see a steaming cup of coffee in it’s logo.

It is now under the ownership of Oracle.