Java Program to find GCD or HCF of two numbers

Or, we can say that GCD or HCF of two numbers is the largest number that divides both the numbers.For better understanding let’s consider an example : –

For example let’s consider two numbers 15 and 35, then

So, now we will create a java program to calculate hcf or gcd of two numbers with the help of a loop and nested if-else statements. 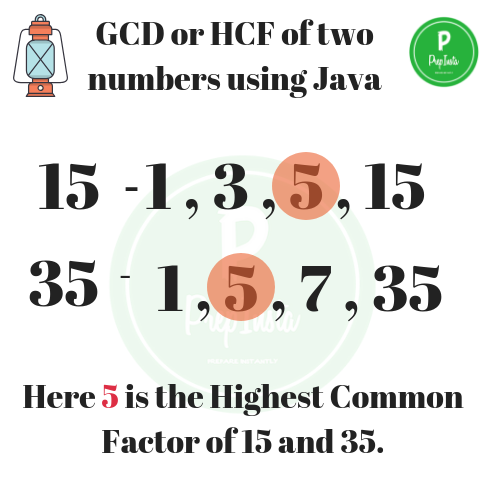 Step 1 : Ask the user to enter two numbers and store in two different variables of same Datatype with name num1 and num2.

Step 2 : Declare a third variable n for storing the divisor and store 1 in it.

(We stored 1 because we have the condition in while loop for (n != 0) and this is the very first condition to enter inside the loop at the first time)

Step 4 : Use the loop to perform work in continuation till we do not get the desired result and use condition while(n != 0).

Step 5 : Calculate and store the remainder in n so that it can become divisor for another division.

Step 6 : Use the if statement for changing divisor and dividend.

Step 7 : Follow the step 4 to 6 till we do not get the remainder 0 and get the Highest Common Factor.