Why is C a Middle Level Language? 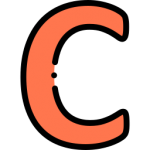 Why C is a middle-level language?

C language merges the best element of high-level language with the rule and flexibility of assembly language. C allows the manipulation of bits and addresses and bytes.

Structure of a C Program

We have languages that are classified into three categories:-

A higher-level language(HLL)  would be the language that we humans speak like simple English. HLL is closer to humans than it is to machines.

C is only a programming language that can be used in Device drivers, to create programs or software to access Hardware levels.

These languages can be used to perform system-level coding i.e. operating system and application coding.

Trivia Most of the hardware you see in home like - Air coditioner, Microwave, Washing Machine is actually coded in Java
Trivia 90% of the PC games are coded in C, C++. Infact unity unreal engine is coded in C, C++, C#