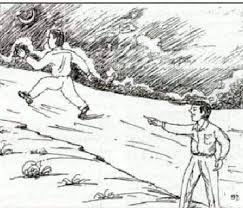 This is Shashank and Vidyut , two brothers studying in high school. They are wearing their school uniform.  Today when they reached home their mother informed them that one of their cousin who has been selected in the ranjhi cricket team for his state is coming to their place so the two brothers are excited and their cousin has just arrived in their village. Shanshank is running towards the lane to receive his cousin and seem to be very excited and joyous.  After they received their cousin all three come to home had their lunch and the evening they played cricket.