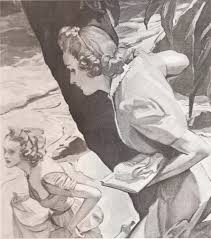 Once upon a time there lived two beautiful daughters of a king in the city of gold. They both were extremely charming in their looks and grew together. When they became quite young, they went to a new town away from their city to study. They were very close to each other and they shared everything with each. The younger sister’s name was Lily and the elder sister’s name was Rose.

One day it happened that Lily seemed very distressed after coming from their school. She tried to find out about the matter but Lily was reluctant to tell. Rose called her out for dinner but Lily slept without eating. Next day Rose again tried to make efforts but all was in vain. She then decided to keep a close look to all the actions of her sister. During the break time, she noticed that Lily was going somewhere in haste. Rose followed her and saw that she was going towards the near garden area. Rose hid behind a tree and kept her eye on Lily.

She noticed that a prince was waiting for her in some distance. Lily went to him and they talked something which Rose could not know. She noticed that Lily was finally happy after meeting the prince and her sweet smile was returned back to her lips. Rose felt happy that Lily was smiling again and thought to talk to her in the evening. She then returned back to her classes